Whenever the idea of running my first ultra marathon comes into my mind, I think of one man, the Ultra Marathon Man named Dean Karnazes! For a long time, his amazing feats were so wild, I thought they were fictional! In fact, I was so sure it was not possible that I made myself check other sources for legitimacy. But it’s true. This amazing person has ran 350 miles non-stop (over three days straight, yes, with no stopping at all!), he also ran 50 marathons in 50 states in 50 days, and completed numerous desert courses (some as long as 135 miles in extreme temperatures). Who is this person, how does he do it, and why?

The man is Dean Karnazes, a corporate professional turned running wonder who has set more records in some of the most challenging events known. His name and face are synonymous with ultra-marathons, which are courses involving more than the standard marathon distance. While many find a normal marathon challenging at 26.2 miles, Dean often runs a marathon before breakfast! 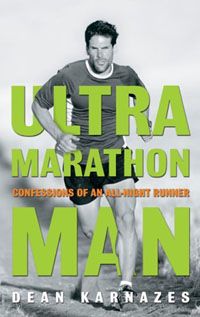 Beginning in high school as a cross country runner, Dean developed his passion and received notoriety early on. Despite his early success, he took a break for fifteen years and only started running again at age thirty after a night of binge drinking. When returning home, he noticed a pair of old sneakers and returned to his old passion. The rest is history.

Running Can Make You Really Hungry!

Dean is also known for his unique eating habits – with all this running, the body needs massive amounts of fuel to operate (think about 5000-8000 calories a day), so he is famous for ordering a Hawaiian pizza pie while running, rolling it up like a burrito, and eating it while still running. He claims that early on when he would run or undertake a serious event, he would consume anything he liked, often junk food, such as pastries, doughnuts and other high fat foods as he claimed they provide more energy. When he is not running, he consumes plenty of salmon and follows a “Neanderthal Diet” where he asks himself if a Neanderthal had access to this food. If they didn’t he will not eat it.

Most recently, in 2011, he ran 3,000 miles across the United States from California to New York City at a an average 40-50 miles per day in 75 days – note his age of 49 while completing this! It's funny to note that driving 50 miles for many is exhausting! (Dean laughed at this comment when I communicated with)

Dean is often asked whether he has some special ability or muscular attribute, but he claims that it is only commitment that allows him to achieve such mind-boggling goals. He was however cited for having an ability to keep lactic acid low but this remains to be proved. He often jokes his family ancestry originates from the same town as Pheidippides – the famous Greek runner who helped to coin the term Marathon.

He is also often a speaker for motivational speeches at organizations and firms and has written several books, including:

Run!: 26.2 Stories of Blisters and Bliss

Dean continues to run today and says he will keep running until he grows tired of it. What started out as a hobby has become very lucrative for him, earning him sponsorship contracts from well known sporting good companies. Dean also frequently returns to Greece and runs in the original marathon results and continues to be a inspiration for many aspiring and current runners!

For those interested in taking up running, several applications exist for smartphones to help build a training program to compete in a 5K (3.1 miles). Read Dean’s book and surely you too can reach any goal you might have including running your first ultra marathon. You may want to wait a bit before ordering a pie of pizza and consuming it while running though!