Build a Massive Back & Save your Hands with Big Back Grips

One can always tell who is serious about weight lifting from those who are not. How? Just look at their palms – if you see calluses, it means they have been lifting weights at the gym hard and often. When I was younger a friend of mine had such deep calluses that every so often they would simply crack open, leaving ridiculously hideous looking cuts on his palms. If only he had a pair of Big Back Grips.

Currently there are solutions and ways to prevent such byproducts of working out at the gym such as gloves and pads. While I have used gloves before, I came to the conclusion, like many others, that they affect your grip strength and the amount you can lift.

I was a bit doubtful when I received these little black pads. I thought they would end up in the same place where my gloves are – however, Big Back Grips are really simple – tough rubber pads small enough to store in your pockets with greater tenacity than those things you buy your grandma for opening bottles of soda. I was eager to test the grips out, especially on certain exercises involving non-insulated handle bars at my gym. 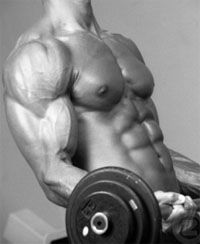 My first test would be with lat pull-downs. After removing the grips from the packages, I simply placed them on the palm of my hands and performed the exercise normally. I could see how one can focus on the exercise better since the pads remove the friction caused by metal handle bars. I found them particularly useful when performing sitting cable rows and other exercises involving your hands and palms moving on the bar.

I usually rip up my palms while executing my rounds of pull-ups. This is due in part to the motions involved with the exercise. You will know what I mean if you tend to swing while performing this exercise with your bare hands on metal handles. When I tried the grips with these exercise, I could perform more reps since I wasn’t worrying about the pain – this will translate in to more reps which is obviously the goal. Contrary to the name they aren’t just for working out the back or lat pull-downs, they can be used for just about any exercise. They are also useful for those who sweat, allowing a tighter secure grip.

Big Back Grips feel tough and are stronger than similar solutions available. I tried to stretch them with a great amount of force and couldn’t rip them apart. The company claims they will last a few months with those who train frequently. Will the grips double the amount of weight you can lift in an instant? I doubt it. But what they definitely do is allow you to focus on the exercise rather than discomforts associated with lifting weights. A bonus is that they are relatively cheap – at fewer than six dollars they are worth a shot. Much cheaper than those gloves I have sitting in a shoe box in my closet.

Get your own pair on Amazon.com - they are cheap! And don't forget to review your gym if you haven't already done so!